LES DANIELS: Through the Years in Pictures … 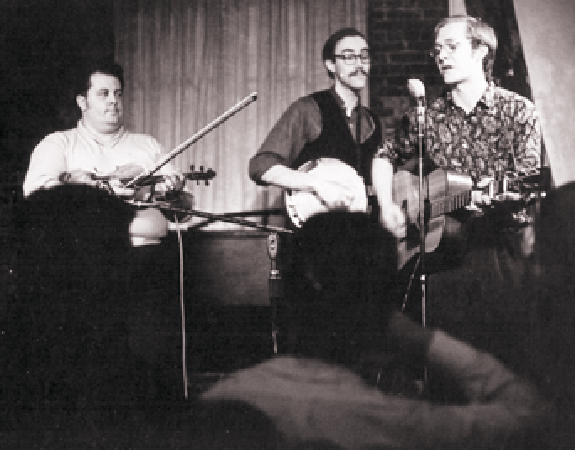 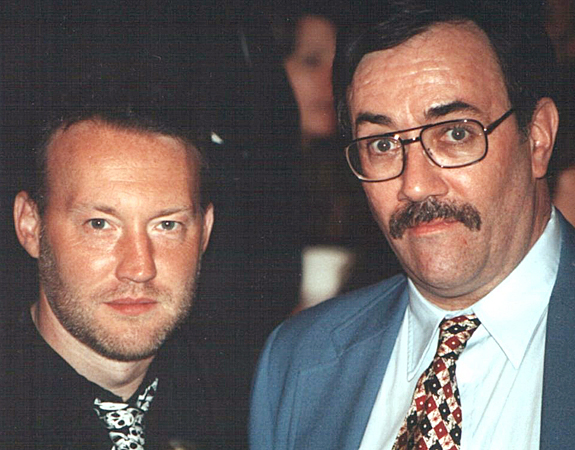 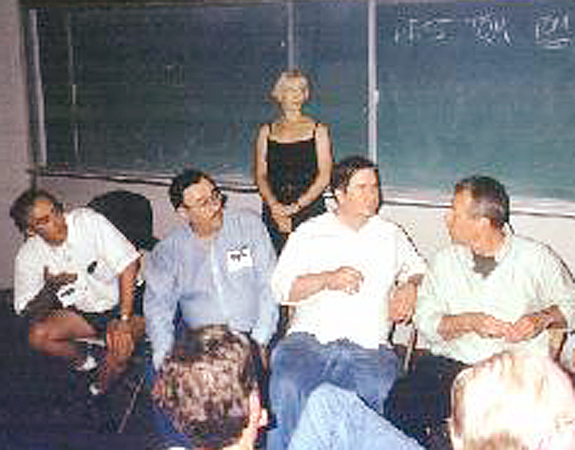 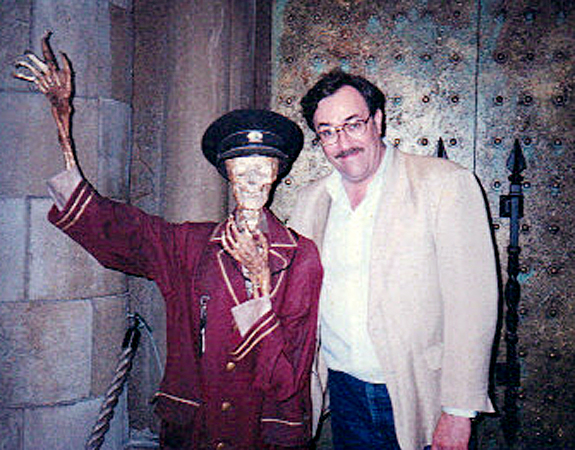 Palling around with an old friend ... 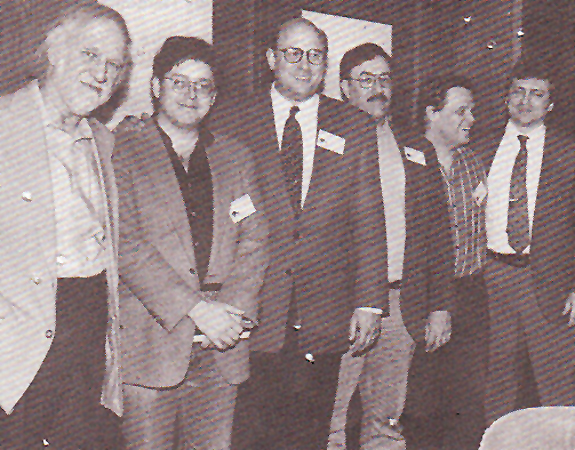 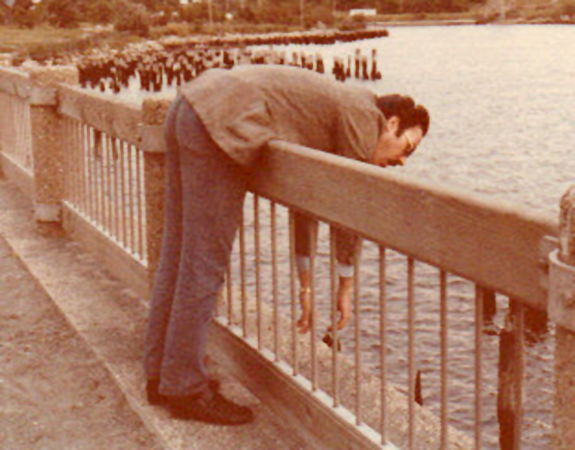 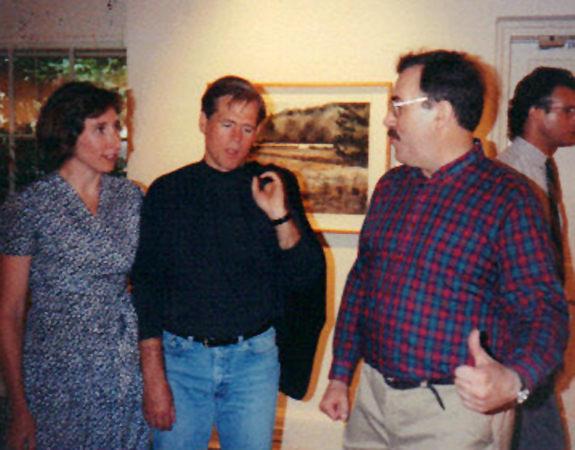 At an early World Horror Convention 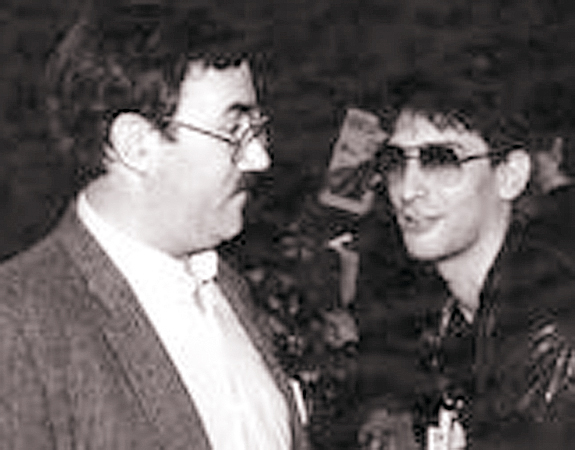 Happily signing his work for a fan 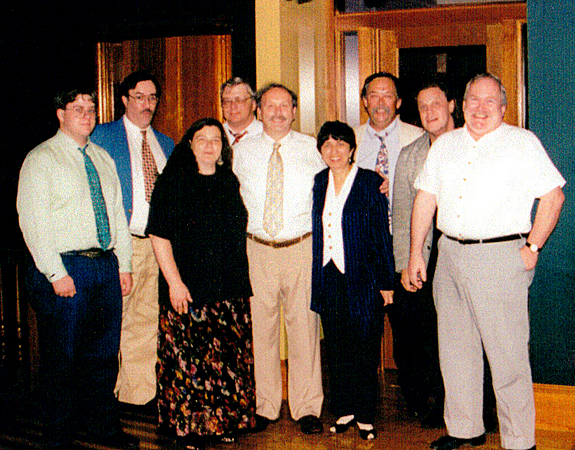 With the Original Necon Committee 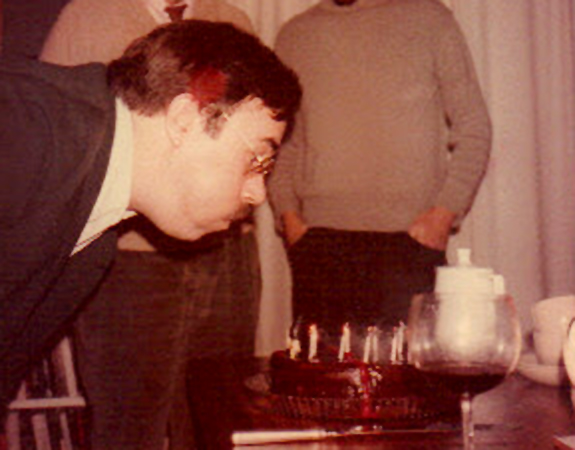 The birthday boy blows out his candles ... 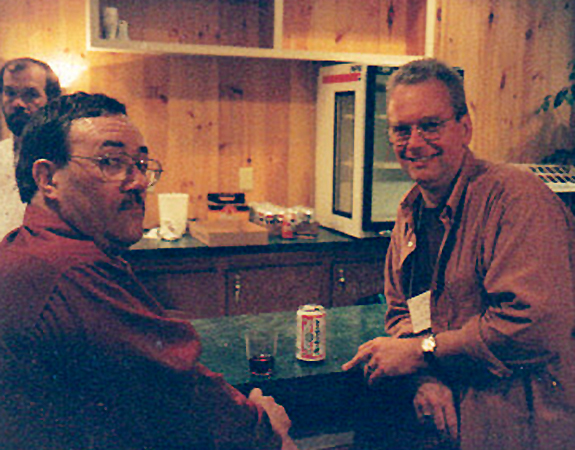 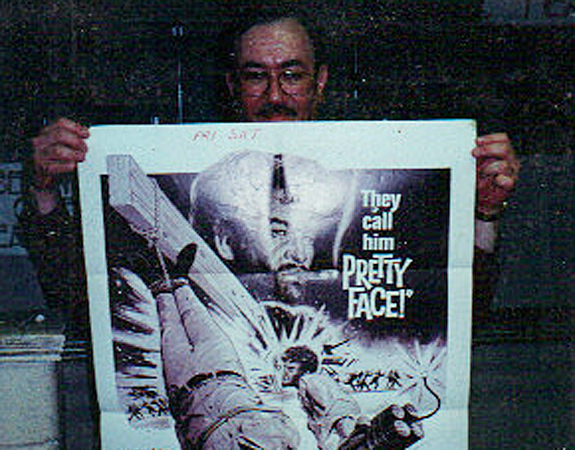 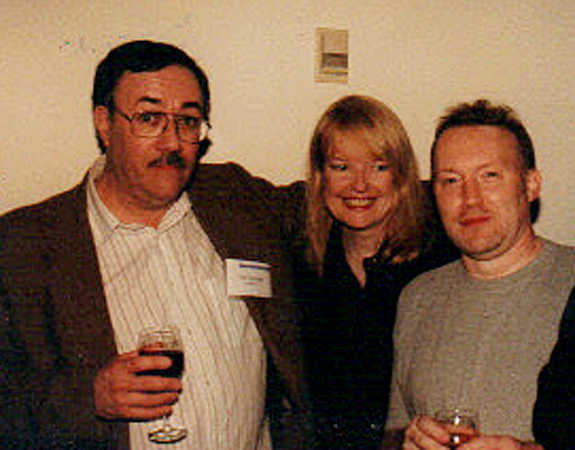 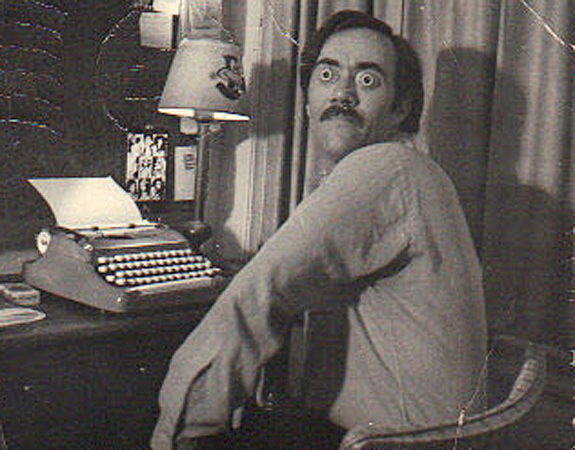 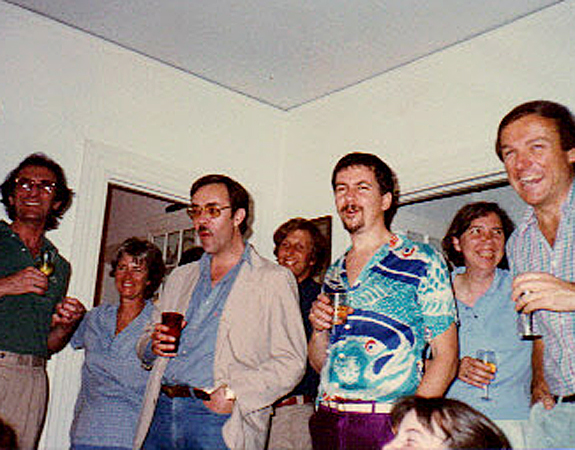 Enjoying himself at an early World Horror Convention 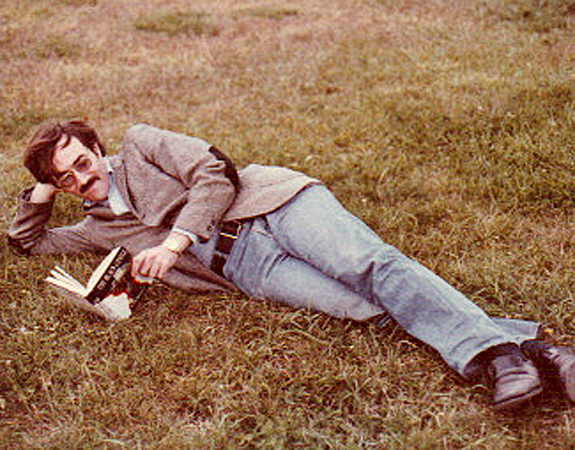 A Few Words From Les Daniels’ Friends, Peers and Fans … 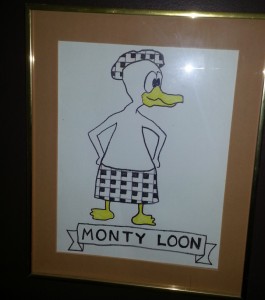 I’ve known Les for more than 25 years and he was one of the smartest most witty characters I’ve ever know. Because we lived so many miles apart, we were never the close friend we most certainly would have been if we shared a common geography. He was the perfect conversationalist because he could expound on any subject, and he was just plain funny as hell. I’ll never forget the bit he did on me when I was a NECON roastee . . . . he claimed I was, indeed, not Italian at all, but actually of pure Scottish heritage, and he had conducted extensive genealogical research to uncover my family’s true coat-of-arms which revealed that I had cleverly converted my Scottish name into something more Mediterranean. He unveiled the plaque, which I include here.

It still hangs on my wall and I am proud to own a Daniels original. It will be passed down to future members of my clan . . . uh, famiglia!.

Les Daniels would undoubtedly be happy to know that he grossed me out this morning.

I was going through boxes of books from my basement last night, trying to decide if I could part with any and partly ease the space problem that fifty-plus years of collecting and (I admit it) amassing has created. Poring through a box of paperbacks I came across Dark Voices 5, a British anthology that had a story by Les that I couldn’t remember reading. I set it aside, and this morning, in an effort to avoid working, I read “Loser,” about a young woman with severe bulimia. And at the end I went (as Les no doubt intended I should do) “oog.” But at the same time I also marveled at his ability to tell a full story and create a truly human character in so few pages, as well as once again performing the Les Daniels trick of writing an ending both surprising and inevitable.

My wife Laurie and I loved Les, both as a person and as a writer. We first made his acquaintance at Necon, the annual Rhode Island-based horror convention, in the mid-80’s, and he became the first person we looked for at the first night’s social gathering. He was dry and funny, incredibly well-read and erudite, and had a knowledge of horror literature and films that was all-encompassing, proven by the numerous times he won the title of Necon Mastermind during “That Damned Game Show” every year.

We got to know another side of Les when he mentioned that he’d been a musician (and still played the banjo, which he often brought to Necon). He gave me a copy of Dr. Daniels and Mr. Lee, which he recorded with his friend Rick Lee, and which I reviewed for Rambles (http://www.rambles.net/daniels_lee.html). It was a delight, with Les’s wry vocals on his original songs, which were quite wonderful. My favorite has always been “Mister Moonshine,” which I sang at Les’s memorial tribute at Necon. An earlier CD of his recordings with Martin Mull followed and was a treasure as well.

Les was an artist too, and every year sent out hand-drawn Christmas cards to his friends. Last year, after Les passed away, I posted one a day to Facebook as a countdown to Christmas, and will probably do the same again every year. They were wonderful little gems of humor and joy.

And speaking of art, one of our greatest treasures that reminds us of Les looks down on us every night. In 1988 we were with Les at the World Fantasy Convention in London, and went to the West Brompton Cemetery, a Victorian era graveyard that was redolent with atmosphere. Though we didn’t go together, Les told us about a pair of statues of children, green with verdigris, that he’d been quite taken with. As it turned out, so had Laurie and I. I’d taken a photo of them, and promised to send Les a copy after I had the film developed back in the states (this was before digital cameras). I did, and the resulting story was Les’s “The Little Green Ones,” which appeared in Stan Wiater’s After the Darkness and was a finalist for the World Fantasy Award.

Last summer at Necon we saw the original art that Steve Gervais had created for the story, based on the photo we’d sent Les, hanging in his booth at the art show. We decided we had to have it, and bought it from Steve. We also learned that it had hung in Les’s apartment for a number of years (on indefinite loan from Steve), which made it even more desirable to us. So now the eerie little green boy and girl look down on us as we sleep every night, and it’s impossible to see them without thinking of our old friend Les.

Les really was one of a kind, and we think of him often, miss him greatly, and remember him dearly. But his words are still here, his voice still speaks. In that box of paperbacks I found both No Blood Spilled and Citizen Vampire. I’d been wondering where they’d gotten to, and they won’t be boxed again. They’re going to be reread, along with The Black Castle, The Silver Skull, and Yellow Fog, and my fondest wish is that I find some more Les Daniels fiction that I haven’t read.

His good work will still be with us and be as good as ever.

What I remember most about Les is his patience with me. We would meet at Lupo’s Heartbreak Hotel for a drink in the afternoon in the early 80’s. We would, of course, talk about music, books we liked, the local scene, etc., but he knew that like a child asking, “Are we there yet?” I couldn’t resist to ask how close he was to finishing Yellow Fog. His reply was always a kind and generous, “Not yet.”

Thanks, Les, for your gracious company.

Back in the dark days of my youth, I was a fanatical comic book collector. And I do mean fanatical – Marvel, DC, Charlton, Dell, Gold Key, Harvey, Archie, Warren. If it had art, I skipped lunch to buy it. I walked the ten mile round trip to downtown Windsor three times a week to get back issues in the used book stores. Walking got me two extra comics a trip. I knew everything there was to know about comics. Except their history. There were the reprints in Marvel and DC comics, the Mad paperbacks, and some EC reprint paperbacks. And then one day, that all changed. I walked into my local Coles book store and there on a table was Comix: A History of Comic Books in America. This was around 1972 and the book was five whole dollars. I gave up chocolate and ice cream for a couple of weeks. (This was back when chocolate bars and ice cream sundaes with a wooden spoon were a dime.)

I had my first real book about comic books. And Les Daniels wrote it. And I read it from cover to cover at least a dozen times the first week.

Years later and I don’t buy comics any more. Now I’m a fanatical horror fan. Same deal only now I have a regular part-time job and am making serious money ($1.45 an hour bagging groceries. Plus tips!) Coles again and what’s this? Living in Fear: A History of Horror in the Mass Media. Hot damn! Comics, Hammer movies, Dark Shadows, Outer Limits, Universal horror movies, the pulps. This book had it all.

I had my first real book about horror. And Les Daniels wrote it.

A few years later and I’m still bugfuck for horror. Here’s my first full-time job because I’m getting married and I must become an adult. (Thanks to my wife Dianne, I later learned that I didn’t have to be an adult — all the time.) I’m a bookstore manager and I discover catalogues and that you can actually do special orders for books that aren’t in the store. Hard cover horror novels!

The first books I special ordered for myself: The Black Castle, The Silver Skull, and Citizen Vampire. They’re by some guy named Les Daniels.

1987 and Dianne and I discovered this thing called Necon. (Thanks Dottie and John Godin.) We got the progress report with the list of guests. Suffering shad! Les Daniels will be there.

When we got to Necon, I got serious whiplash: there’re Charlie Grant, F. Paul Wilson, Tom Monteleone, Doug Winter!

At the signing party on Friday night, I had my box of books. Got them all signed. And then I spotted him over there. He was everything I didn’t expect. He was quiet, wore rather boring clothes, and looked like my uncle. Back then I always felt like I was imposing asking an author to sign a book, even at a signing party. I shuffled over to the man and and shyly asked if he would mind signing a few books for me. Les Daniels smiled at me and in his soft voice said sure. I don’t remember what I said or what he said. I’m sure I was an idiot and gushed about how much I loved his books.

I had met the man.

Over the years, we didn’t become friends. I doubt he even remembered who I was every year when I got him to sign something. But man, he was Les Daniels and he was there.

I miss him. I miss his banjo. I even miss him in that damned game show because he knew everything and was funny as hell.

Dianne has a cool photo of Les at one of his last Necons, snoozing in a chair by the registration table. Rest in peace, Les.